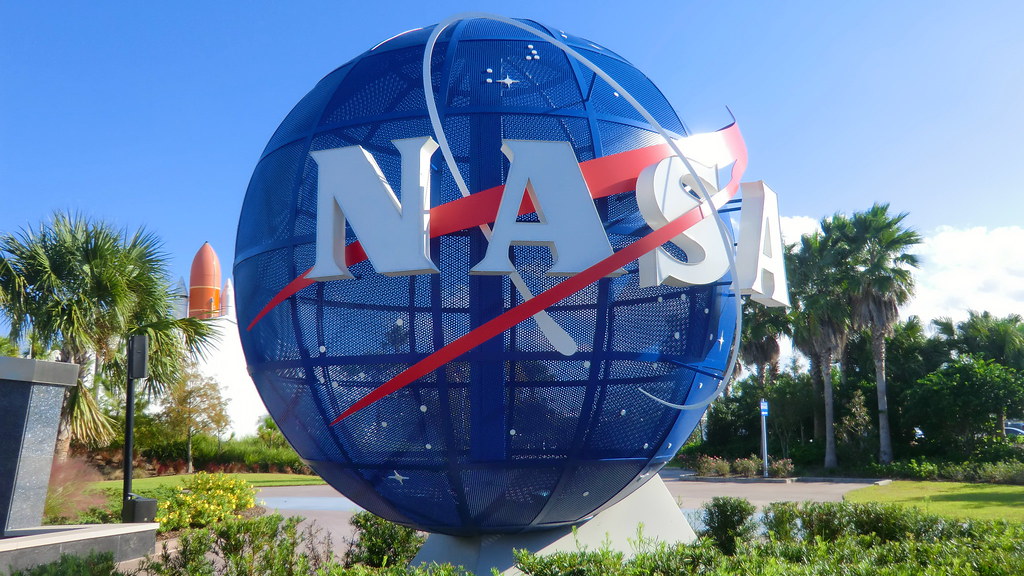 Kennedy Space Center, Cape Canaveral is just over an hour from Orlando and makes a fantastic day out if you are visiting the Florida theme parks. The theme parks are awesome, but here at Kennedy the amazing sights are for real. Forget Buzz Lightyear, here you can meet astronauts who have flown in space, see a space shuttle, visit a rocket garden and experience the best that NASA has to offer the visitor.

Visiting the Kennedy Space Center is a unique experience and was one of the highlights of our Florida trip.  The center gives a fascinating perspective on the history and the future of space travel. But more than the rockets, the shuttle, the telescopes and the spacecraft, what lingers with you is the spirit of adventure, of ambition, of the ceaseless quest to know more about our universe and through that our own planet and ourselves. The stories here are of human endeavour, of incredible successes and catastrophic failures.  This, combined with the opportunity to speak to astronauts and hear first hand their inspiring and moving stories, make this an unmissable and unforgettable experience.

The centre is divided into mission zones.  It’s safe to say that the highlights of our trip to Kennedy were the Space Shuttle Atlantis and the Astronaut Encounter. This is a must do.  If you do nothing else at Kennedy, you have to see the Atlantis Space Shuttle, one of only 3 shuttles in the US which flew in space. You watch a film about the shuttle first and I won’t spoil the surprise but the way the shuttle is revealed to you is a piece of showmanship in itself. The shuttle is positioned with its payload doors open so you can see inside.  If, like me, you grew up watching the shuttle launches on TV you will really appreciate the opportunity to get close to this iconic and extraordinary spaceship.   As well as the Atlantis itself, there is an excellent exhibition telling the story of  30 years of space shuttle history and the role the shuttles played in the future of space travel and exploration. You can experience what it was like to take off in a shuttle at the Shuttle Launch Experience, a simulator ride that astronauts say is the nearest thing to actually being in a shuttle take off. My children loved this. They also liked a slide that demonstrates the angle that the shuttle glides on to earth when landing. The shuttle launched like a rocket but landed like a plane and the slide was a great way to teach kids about shuttle landings! They also enjoyed exploring the model of the international space station that children can crawl around inside. Astronaut training simulators were another popular attraction with my family, where you can carry out some of the tasks needed to operate the shuttle and engage in its work. We enjoyed trying to do the repair tasks to the shuttle with the massive space gloves on – quite a challenge! Forever Remembered is a tribute to the crews of the shuttles that were destroyed, Challenger and Columbia. A poignant and inspiring exhibition remembering the bravery and dedication of the crews and telling their personal stories. I found this very moving.

The Hubble space telescope story is also told in the Shuttle mission zone.

Yes, you get to meet a real, bona fide astronaut who has travelled in space.  How totally amazing is that? Who doesn’t want to meet an astronaut?  #Awestruck.

The astronaut in residence when we visited was Wendy Lawrence. Commander Lawrence gave a fascinating overview of her career, her desire to travel in space, the gruelling training that she underwent, including her time at Star City in Russia. Commander Lawrence talked about 4 missions which she flew and the 1,200 hours she spent in space, including on the International Space Station. At the time, it was a few days before Tim Peake was due to return to Earth in a Soyuz space capsule and hearing Wendy talk about her returns to earth in Soyuz was very timely. There was time for questions and you could have your photo taken with Commander Lawrence afterwards. She also signed autographs in the shop later.

The astronaut encounter is included in your ticket. There are optional extras of attending a lunch with the astronaut and a guided tour of the Space Center with an astronaut..

The schedule of astronauts is here if you want to see which astronaut will be there on the day of your visit.

These were our favourites at Kennedy but there is so much more to see.  Other attractions include:

If you want to find out more about the Apollo landings, this is the tour for you! This bus tour also visits the Moon and Apollo exhibits, the lunar theatre and Saturn V. You can only visit these on the bus tour.

The tour takes you past the famous vehicle assembly building to the actual launch pads. When there are rockets launching the tour takes a slightly different route – Kennedy is still a working rocket launch site. The Apollo 8 section of the tour includes the story of the Saturn V rocket and the actual consoles used to launch Apollo 8. Exploring the Moon explains the Apollo missions and includes rockets and lunar modules and space buggies. In the Treasures gallery you can see spacesuits actually worn in space, amongst other gems.  The Lunar theatre tells the story of the Apollo 11 moon landing and the experiences of the handful of astronauts who have actually walked on the moon.

Saturn V is a highlight on this tour. 13 Saturn rockets were launched but this is one of only 3 remaining in the US.

NASA NOW AND NEXT & JOURNEY TO MARS

Mission briefing – participate in a briefing about NASA’s current and future space missions. Find out about the mission to Mars and play interactive games and about NASA’s programmes to explore deep space.

Click here to see the current Imax programme. The films they show here are narrated by past and future astronauts and include footage from the International Space Station.

A garden planted with space rockets! Wander amongst rockets from the Apollo, Gemini and Mercury missions. You can walk across the actual gangway they used to board Apollo 11.

This new attraction features the US Astronauts hall of fame, a 4D theatre and the Gemini 9 space capsule, amongst others. Here you can find out the stories of the astronauts who have flown in space.

You’ll find your own favourites at Kennedy Space Center, stories of exploration that resonate with you. Have a wonderful visit. I’ve no doubt we’ll be back one day. Space exploration continues and the stories of the future are being made right now.