Disneyland Paris, that nirvana for small people brought up on a diet of fairytales and wicked stepmothers, a land where dreams really can come true.  Trips to Disneyland Paris tend to be short and with so much to do there you could give yourself a hernia day one. I’ve heard it said that Disneyland Paris is not a patch on Disneyworld Florida. Having been to both I can’t say I share that view. WDW Florida is enormous and you could stay there for weeks and not do everything, but Disneyland Paris has a charm all of its own, is more manageable in size for younger kids and heck, you can visit it in a weekend from most of Europe.  For kids, either one is a whole lot of awesome. 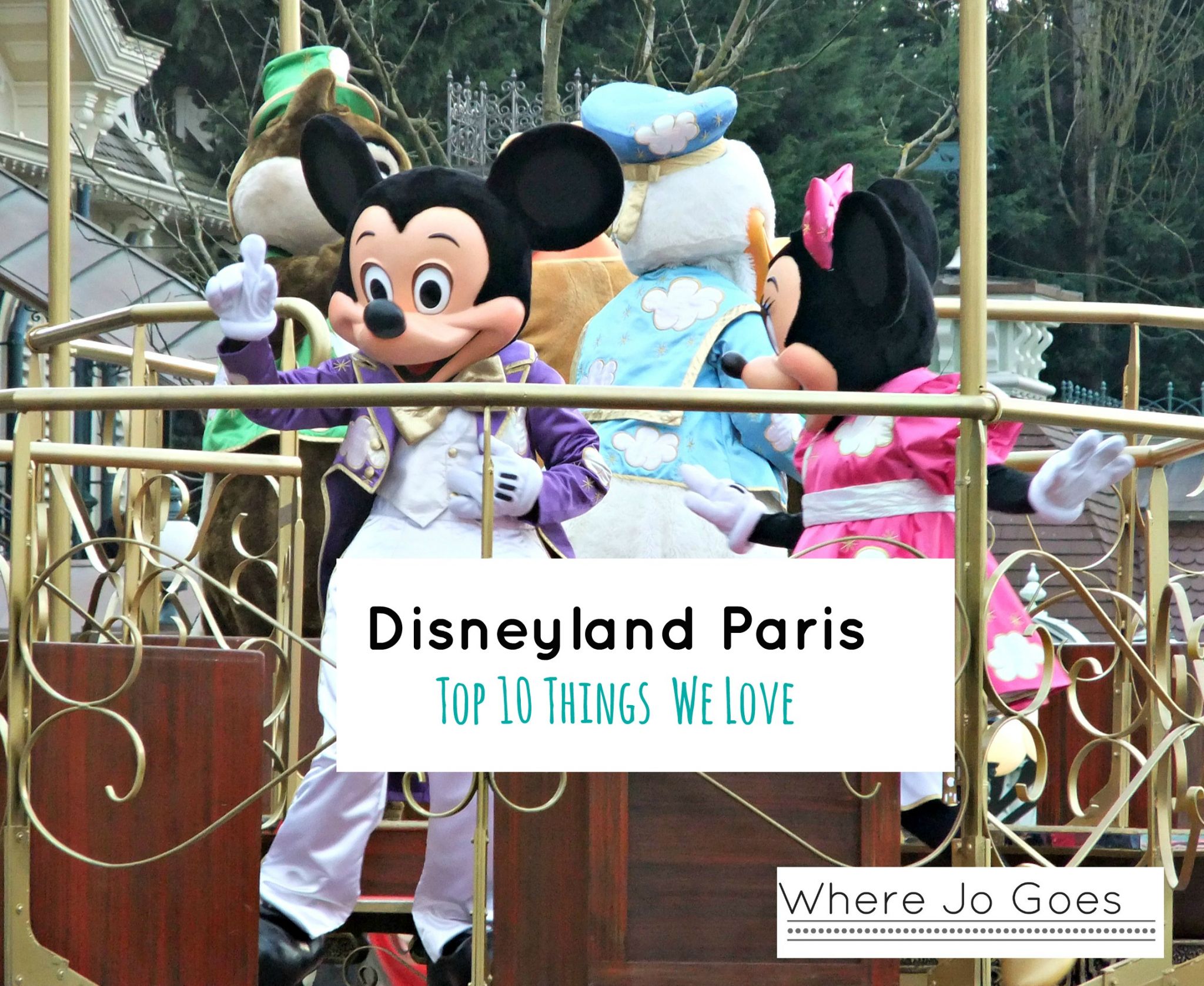 Having been to Disneyland Paris a few times now, I am sharing our family favourites to do and see. Everyone has their own faves but these are ours.

I know, I know…its expensive. But for proximity to the park it can’t be beaten, its literally at the park gates and this means that you can pop back during the day for a break if you need to and cuts down on faff factor travelling to and from the hotel.  We like the large family bedrooms, the Inventions Restaurant which does a decent if expensive buffet evening meal with fresh seafood, the glowtini cocktails and the spacious lobby with that distinctive ‘you are here’ smell. We used to love meeting the characters at breakfast time and have fond memories of my girls skipping down the corridors with Minnie Mouse but alas alack the characters are not in the hotels any more. Staying in a Disney hotel means that you can use those Early Magic Hours (EMH) to your best advantage.

The fastpass system at Disneyland Paris isn’t quite as developed as the one at WDW Florida but its still well worth getting your head round this system to beat the queues. You put your park ticket into the fastpass machine at the attraction you want to fastpass and out comes a timed ticket. You go back to the attraction at that time and it means that you can enter via the FP line rather than the normal line so it cuts queue time. Be smart with your FPs. You can’t book another FP till you use the one you have and they do run out, so grab a FP for any must do attractions as soon as you enter the park. Don’t waste FP on attractions with small queues and get your next one as soon as you have used your FP. If you are staying in certain Disney Hotels you also get an extra FP per day, including the Disneyland Hotel.

“Hey there, Hi there, Ho there, its a Disney kind of day!” And you wouldn’t want it any other way. The parades at Disneyland Paris are not to be missed. Its a chance to get up close to your favourite characters, wave hard enough and they may just wave back. From car parades to musical extravanagazas, fairy tales and villains, lights, camera, action you really cant miss this. 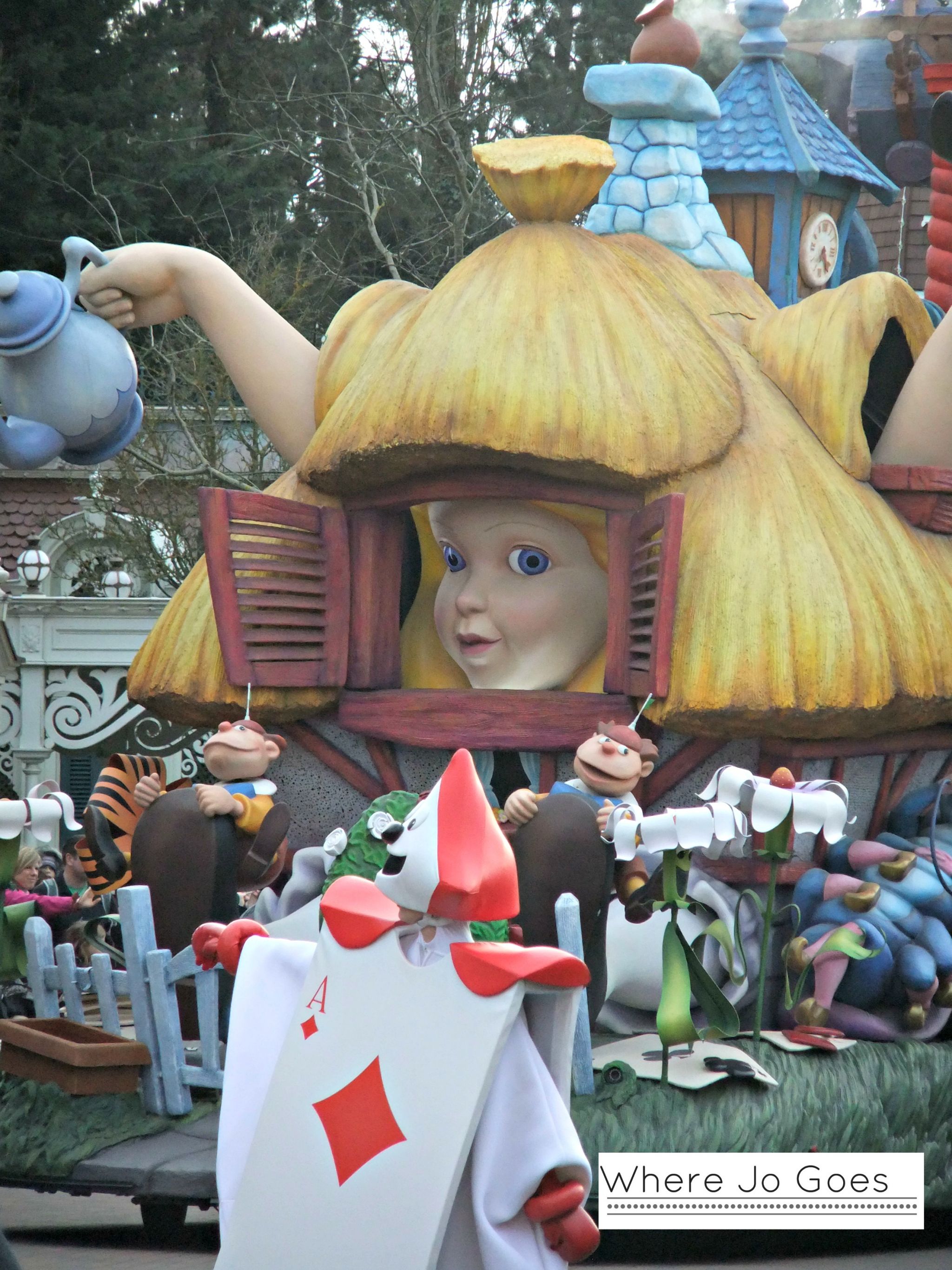 Confession – this ride is my nemesis, but its one of my kids favourites. They first rode it when they were 5 and only just about tall enough and they forced me onto it too. If they let little kids on it cant be that scary right? #wrong. Its not scary – its terrifying. But if freefalling down 13 storeys is your thing – you will love it. FP can go quickly so grab one asap.

The theming of Fantasyland is awe inspiring. The detail, the imagination, the artistry of this land in Disneyland Park gives it the dazzling charm that makes Disney so popular. There’s Jack’s Beanstalk, there’s Excalibur’s sword, , there’s the dragon that lives underneath the castle, gateway to Fantasyland and the backdrop to this fairytale kingdom. If you want to get in touch with your inner child again, Fantasyland is the place to do it. My favourite ride here has to be’ Its a Small World’ and we’ve never had to queue more than a few minutes for it. Warning, you will be humming the song all day.

If you want to speed up to 100km per hour in less than 3 seconds whilst having Aerosmith blast you with their large lung capacity – this is the ride for you. My kids *love* it. I don’t. Enough said. FP available.

A ride that the wimpier members of the family i.e me, can enjoy. All aboard as you search the galaxy firing lasers from an onboard cannon and trying to outdo your family members with the highest score. FP available. We have been known to do this ride 3 times in a row in a competitive frenzy.  That’s not compulsory…

There are a few different ways to meet the characters.

-You can queue in the parks. At present there are not FP for character meet and greets in DLP as there are in WDW. You could be queuing for up to an hour for the more popular ones such as the princesses.

-You can see the characters in the parades.

-Characters do wander about the parks we have met many this way.

-You can do a character meal. This is what I recommend if there are specific characters that your child wants to meet such as the princesses who you can meet at Auberge de Cendrillon in Fantasyland.

Two of our favourite restaurants for meeting characters are Inventions Restaurant at the Disneyland Hotel and Café Mickey. Inventions has a range of different characters that circulate during the meal but you can’t guarantee which ones they will be.  Check online which restaurants the characters are at and book in advance.

Smiles galore, magic is in the air and at some point you will see your child’s awestruck face and you’ll want to bottle this moment (probably for when they are having a tantrum about wearing gloves later #beenthere).

I just love that feeling when you step into the Disneyland Park and Main St is in front of you, the castle at one end, music playing and you get that wow factor feeling. Cant beat it. That’s why we keep going back!

If you are going to Disneyland Paris,

Book restaurants either before you go or on arrival. Learn from my mistakes. We didn’t do this on one visit and spent the first evening at McDonalds and even there was a 45 minute queue. When you have tired children who have done a lot of walking, easy and quick access to food and sleep is essential. Some places don’t take bookings but most do. Concierge at the hotel can take care of reservations for you.

Take your own costumes with you. The costumes at Disneyland Paris are fantastic quality with hooped skirts on the dresses for example. They are also very expensive so chuck that Cinderella/Tigger/Buzz costume in the bag before you leave. Characters are also likely to make a beeline for kids dressed up as them or waving a toy representing them aloft.

Don’t forget the big pen for your autographas as characters can’t hold normal pens in their big fluffy hands. I have heard of some families where characters fill their autograph books whilst they are out of the room 😉 worth considering if you have autograph mad kids that are easily fooled.

The Dibb –Check out the Dibb website for all things related to planning a trip to any of the Disney parks. 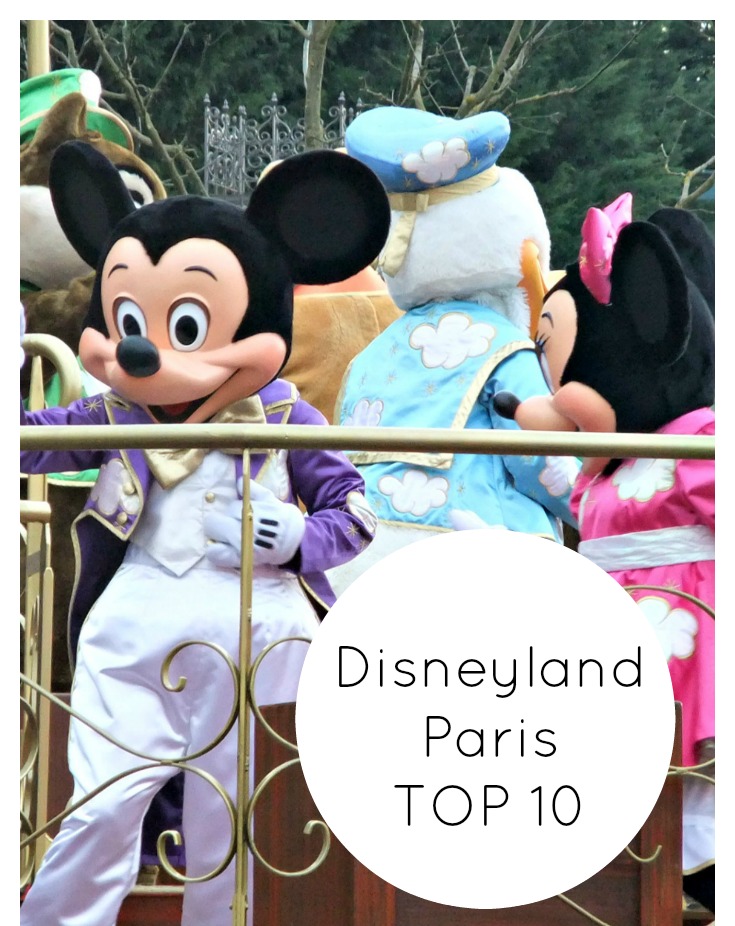 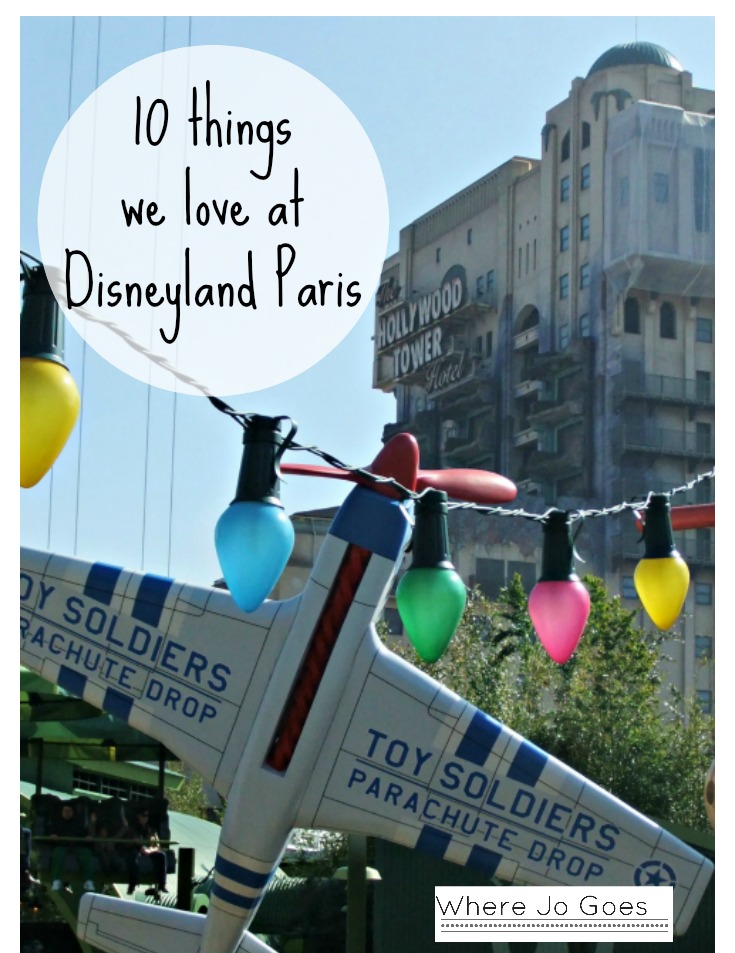 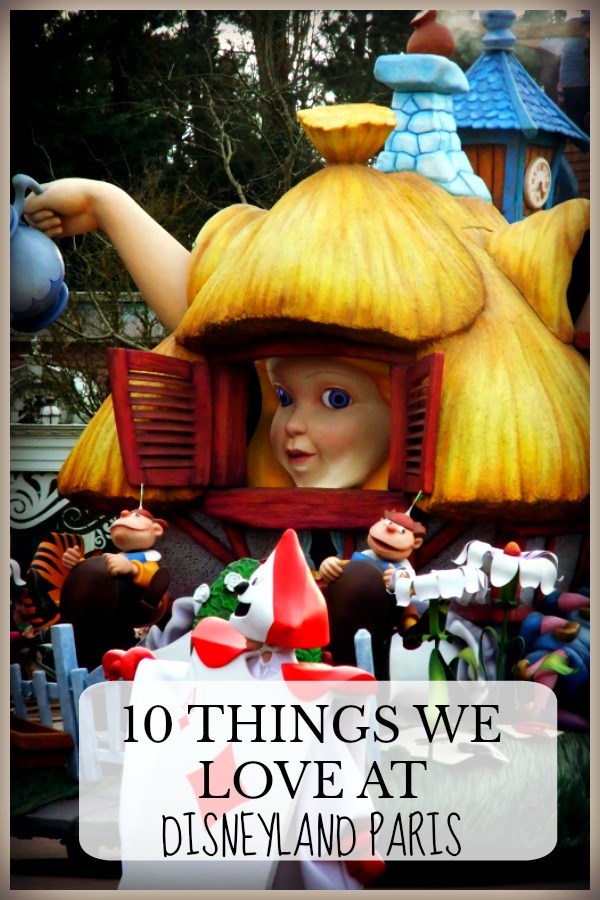 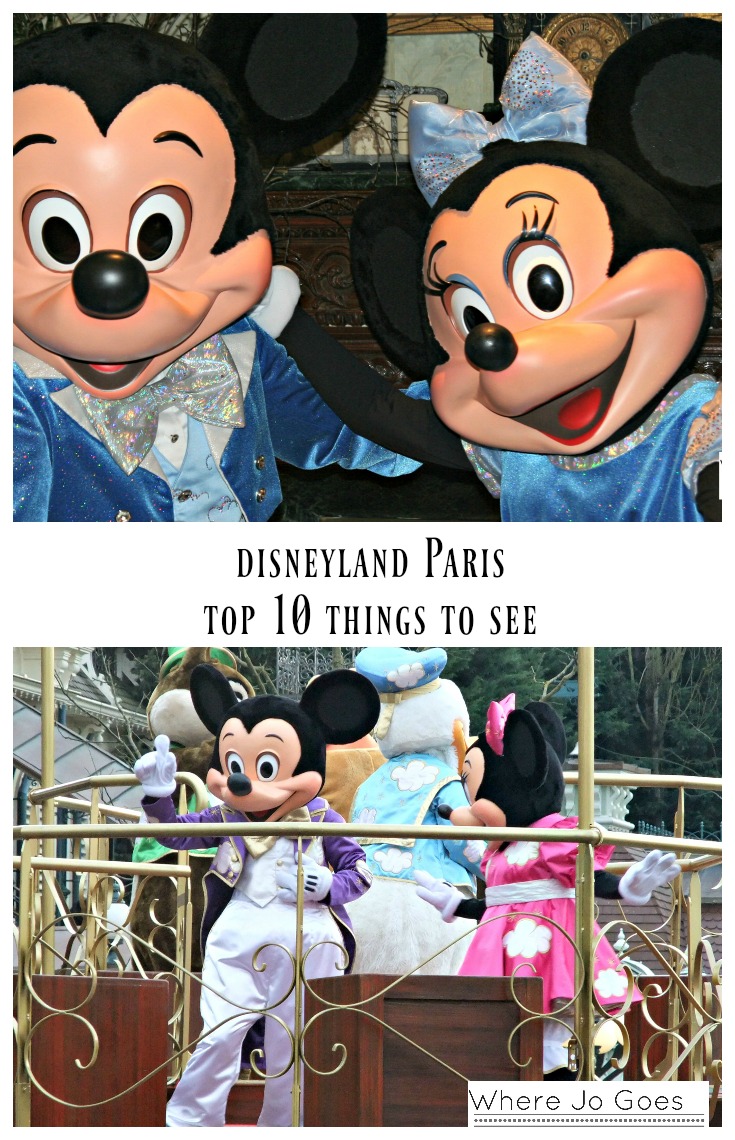 Where Jo Goes other Disney Reviews

This post is in no way endorsed or sponsored by any of the organisations mentioned. All views and photos are my own. Copyright Where Jo Goes