Nestled in the bucolic English countryside, Lacock, Wiltshire is a village famed for many things.  It’s the birthplace of photography, the location for a myriad of films and TV series and it’s timbered houses and mellow stones make it one of England’s most attractive and historic villages in its own right. Most of Lacock village belongs to the National Trust. From Harry Potter to Cranford, via all things Jane Austen, if it features wands or bonnets it was probably filmed in Lacock. If you haven’t previously come across William Henry Fox Talbot, the inventive fellow who took the world’s first photograph at Lacock Abbey, you may have heard of another of village’s other alumni, mega vlogger with teen appeal, Zoella.  She may not have a museum dedicated to her just yet – but give it time!

TOP 5 LACOCK, WILTSHIRE THINGS TO DO

Lacock Abbey has been many things over the years. Evolving from an abbey to a nunnery and a spell as a royalist garrison in the English civil war, it then became a family home. The Abbey, gardens, brewhouse and bakery are all open to the public through the National Trust. Don’t miss the octagonal tower in the house and of course the window which was the subject of the first ever photograph. If you are going round the Abbey, allow a couple of hours to do everything. The guides in the Abbey are brilliant and have lots of entertaining stories to tell and interesting things to point out.

The medieval cloisters of the Abbey were used in the Harry Potter movies as Hogwarts school. Professor Snape’s and Professor Quirrell’s classrooms were filmed here, as were the Mirror of Erised scenes. Eagle eyed Harry Potter fans may spot that the Potters’ home from the Philosopher’s Stone is also in Lacock.  More recently Lacock was the location for filming the Trials of Grindelwald and Downton Abbey. You can download this map to see the various film locations in the village.

Head to The George Inn to see photographs from movies and TV series filmed in Lacock- play spot the character!

Wiltshire’s famous Lacock village is owned almost completely by the National Trust, who work to preserve it. It’s not a museum, it’s a real working village and all the houses are lived in. There is a small school and all the infrastructure of a traditional English village.  The houses are predominantly 18th century and the church and the tithe barn are 14th century. 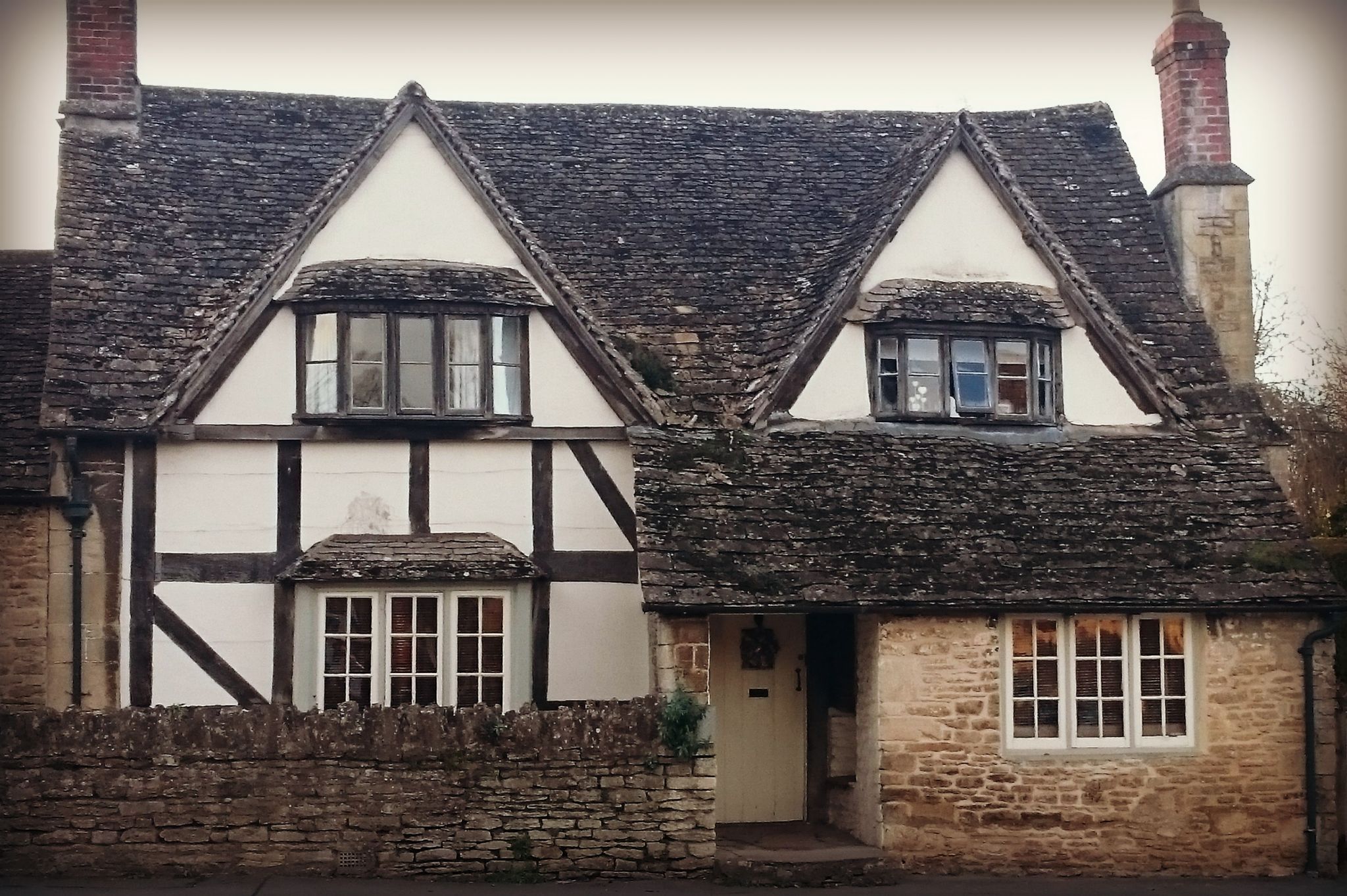 There are plenty of places to eat and drink in Lacock. One of my favourites is the King John Hunting Lodge Tea Room with its pretty garden and traditional English teas, a great summer option.  Here you can try the Lacock Lumb. Named after a Scottish chimney (lumb) it is a tower of deliciousness. Not quite toast, not quite crumpet, not quite scone, this is the place to sample the Lumb – you won’t find it anywhere else! 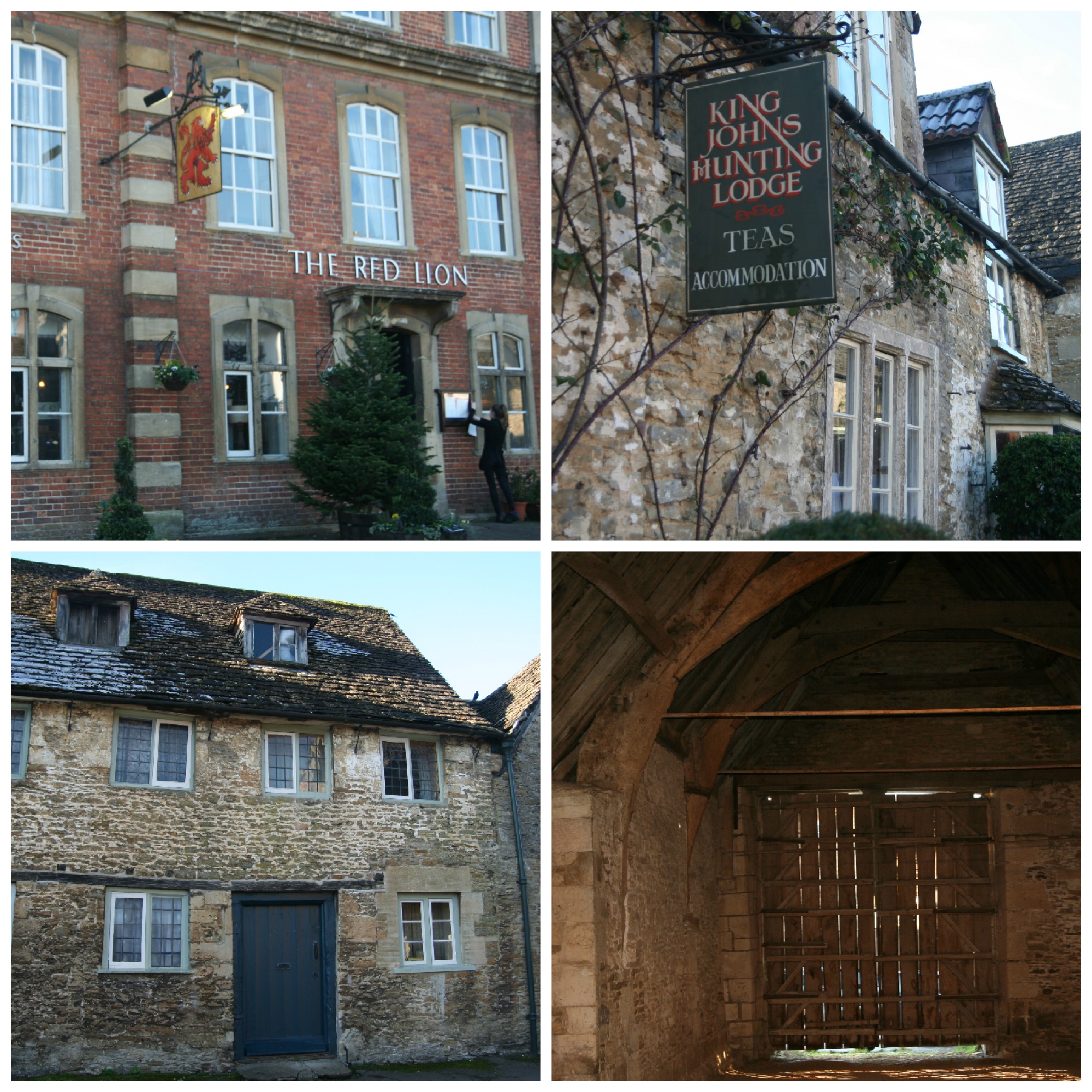 In winter I love The George Inn, complete with medieval stocks and a fireplace with a dog wheel where our canine friends used to turn the spits of roasting meats. Luckily the dogs as chefs concept has had its day but the roaring fires are still going. If you have come from overseas looking for the quintessential English pub – this is it. 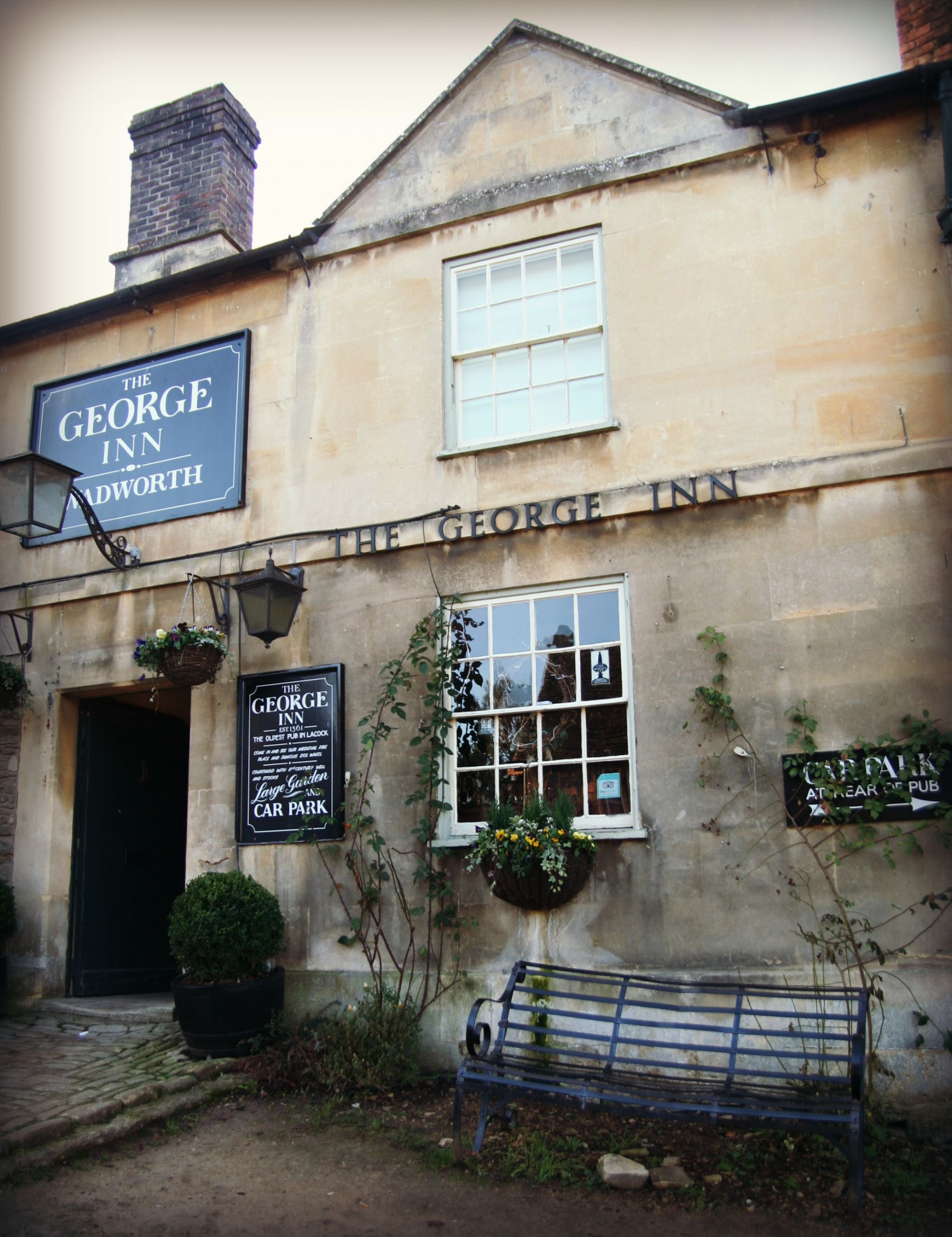 Who needs actual shops with walls and doors and checkouts? Not Lacock! Yes it does have some small village stores and specialist retailers, but what it also has is a culture of doorstep shopping. Enterprising locals capitalising on the village’s status as one of the most charming in England purvey their wares from their doorsteps. Jars of jam are accompanied by signs warning they are still warm. What is available on any given day will vary but can include fresh eggs and chutneys, fudge, huge chewy meringues in glass jars, plants, flowers and who could resist a pickled egg?

The village hall also often has craft markets where you can ‘meet the makers’ of the products on show and for sale.

My top Lacock shop though has to be the chocolate shop, Coco Chemistry, where it surely is impossible to leave empty-handed. It’s handmade, it’s local and it’s utterly scrumptious. A bit hit with the children who start asking for the chocolate shop as soon as the word Lacock is mentioned.

Wiltshire Scrapstore has a charming shop in the village selling upcycled items for gifts, all in aid of local good causes. 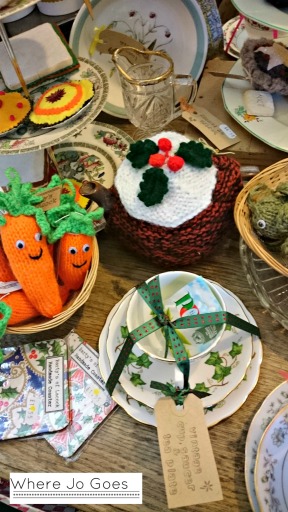 TOP TIPS FOR A DAY OUT IN LACOCK

You need to park in the National Trust car park outside the village and stroll into the village itself. Parking is free for National Trust members, pay and display for non members. There are some areas of the village where you can have a picnic. You only need to pay to enter the Abbey and Photography Museum. There is no charge except parking to wander round the village.

If it’s raining …. the Abbey and Museum are both indoors

If the kids are running amok … there is a playground in the village where they can let off some steam . It’s also a good place for a picnic. Pooh sticks and splodging in the river are also options.

If you are from overseas looking for a particularly quaint English location, you are seriously going to be challenged to find a more traditional English village than this. It is eye-wateringly pretty with all the key features: church – yes; grain barn – of course; village hall – check; half-timbered houses – it’s a yes again. 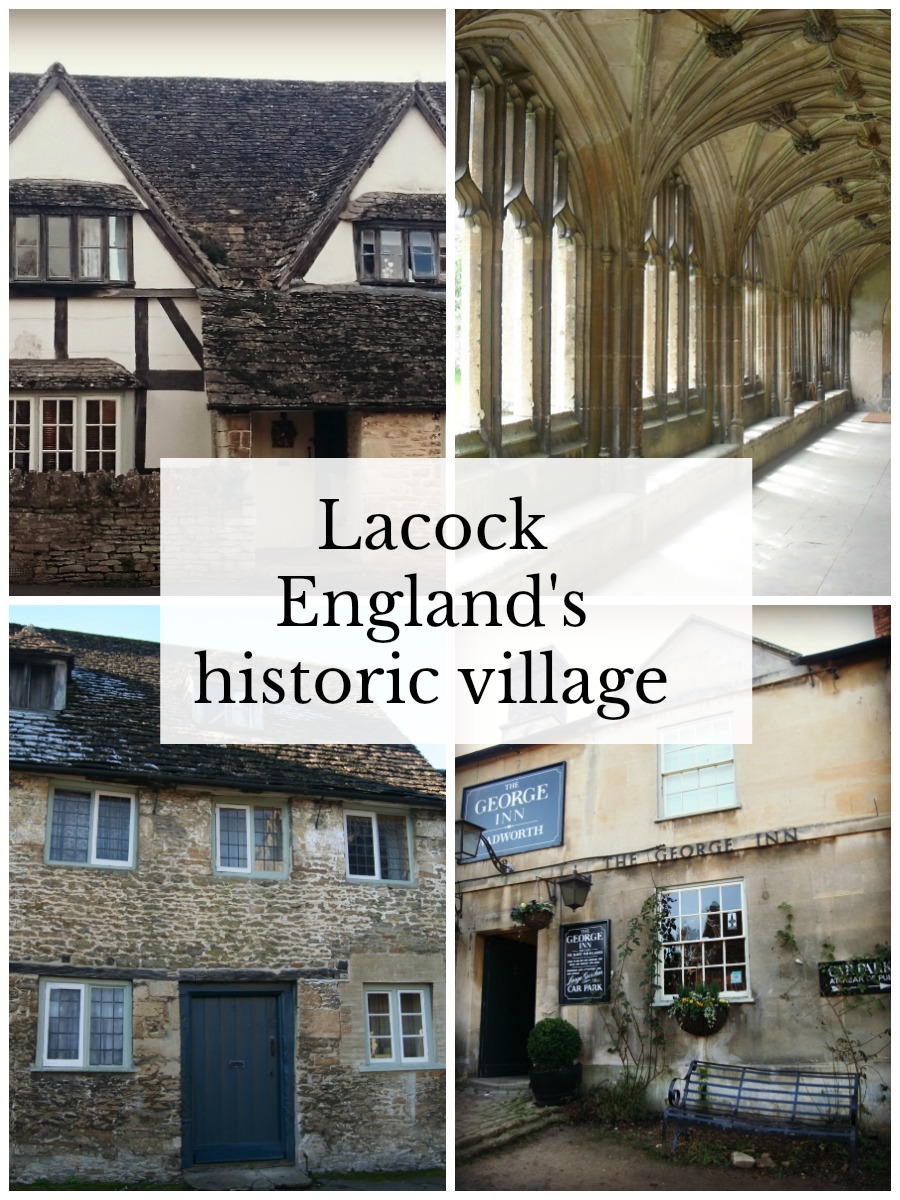 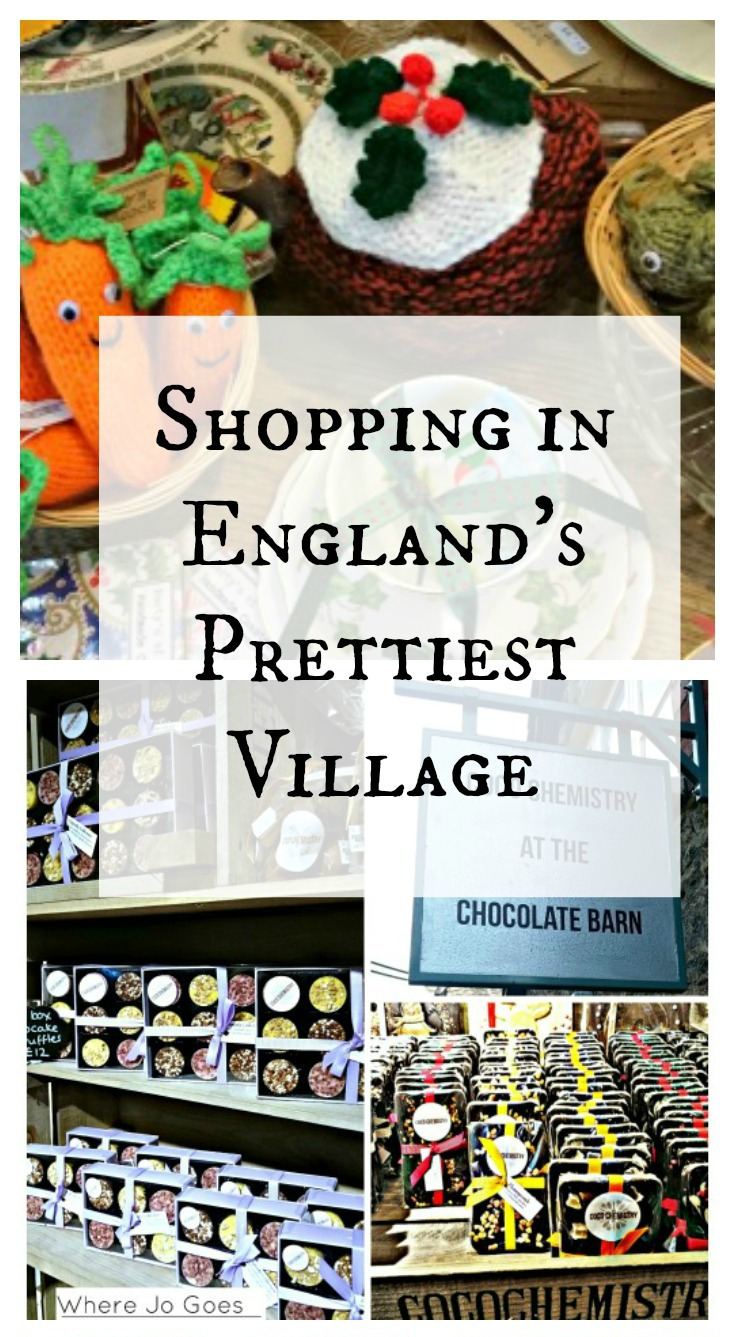